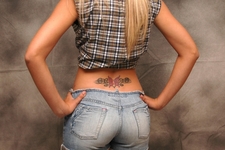 In a study published recently in “Contact Dermatitis”, researchers found that 4% of those with tattoos had experienced a rash immediately after being “inked” and an additional 6% reported skin problems including severe itching and swelling lasting longer than six months.

Study co-author Dr. Marie Leger, a dermatologist and assistant professor at the New York University, described the reactions as quite striking. “The coloured portion can sometimes raise up as much as a centimetre above the skin and can affect the texture of the skin and the way the tattoo looks,” she explained.

Leger suspects that allergies could be at the root of many of the rashes. Nearly two-thirds of the people with long-lasting rashes reported having allergies, as compared to just one-third in the group that had no reactions to the inking. Some people said that their rashes seemed to become worse when exposed to the sun, particularly red and yellow tattoos.

Overall, red ink appeared to be linked with rashes more often than other colours. The pigments used in red tattoo ink are Ferric hydrate (sienna), Sandalwood, Brazilwood and Mercury sulfide (cinnabar) which causes the most hypersensitivity of them all.

That wasn’t a surprise to Mike Martin, president of the Alliance of Professional Tattooists.

“I don’t have any statistics or percentages of people who break out with a rash and can speak from my personal experience only,” Martin said. “The prevalence of a rash appearing is uncommon although not unheard of throughout the tattoo industry. Some folks’ bodies do not like red pigments.”

The rashes usually appear during the healing stage, though they can appear after the tattoo looks like it’s healed, Martin said.

“I have heard of the rash appearing 12 months after the tattoo has been healed,” he added. “It is usually in the site where red pigments were tattooed into the skin. The rash persists until all of the red ink has been pushed from the skin.”

A substance called para-phenylenediamine (PPD) that is commonly found in hair dye is also often used in black ‘henna’ tattoos that may contain no henna – a type of shrub – at all. Though banned in the UK and Europe, PPD in ‘henna’ tattoos is available in other countries.mexican tattoo

Having a henna tattoo that contains PPD just once is enough to make a person have an allergic skin reaction at a later date.

If you’re planning on a tattoo, the advice is: