Seborrhoeic eczema thrives in areas of the body where there are increased numbers of sebaceous glands, such as the scalp and sides of the nose.

The cause is not entirely clear, but research has shown that a yeast called pityrosporum ovale (also known as malassezia furfur) is found on the skin of people who have seborrhoeic eczema. But it’s not clear if this yeast is the sole cause of seborrhoeic eczema or merely a contributing factor. 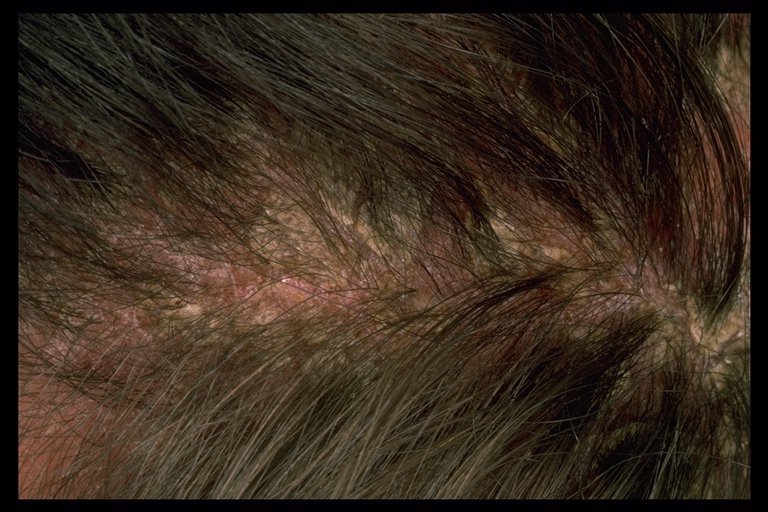 Adult seborrhoeic eczema affects more men than women, mostly appears after the age of 20 and peaks at 40.

It usually starts on the scalp as dandruff that progresses to redness, irritation and increased scaling, which becomes seborrhoeic eczema. As the scalp becomes inflamed, the eczema may spread onto the face and neck.

The eyebrows, temples and folds at the sides of the nose and neck are often affected with the area looking red and shedding small white flakes of skin.

Seborrhoeic eczema can be particularly bad behind the ears where larger, greasy scales stick to the skin and surrounding hair, making the area look thickly crusted. The ear folds and ear canal may also be affected, causing irritation inside the ear, which is called ear eczema.

Seborrhoeic eczema mostly occurs only on the scalp and face, but it can extend to the middle of the chest and back, especially in men. Other areas which can also be affected are the armpits, under the breasts, in the groin and between the buttocks and genitals.

With treatment the condition can be successfully controlled in most cases so that the skin and scalp are comfortable much of the time. But unfortunately, seborrhoeic eczema does tend to return, especially when treatment is stopped. 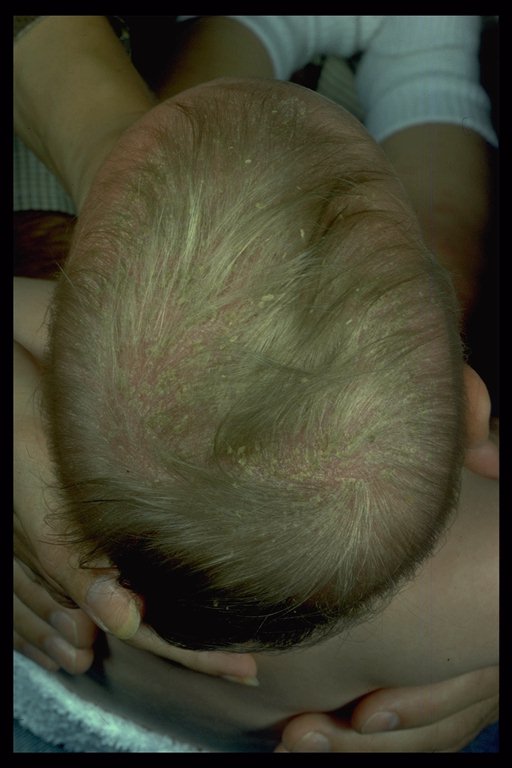 Childhood seborrhoeic eczema is usually seen in infants under the age of one and can appear quite suddenly between two and six months after birth.

The nappy area is often affected first but it tends to spread fairly rapidly so that the scalp, face, neck, armpits and sometimes even the trunk are soon affected – this may seem rather alarming but don’t worry, it will soon improve!

In the nappy area, the skin looks red, inflamed and flaky and the surface may feel bumpy due to tiny blisters. The skin scales in this area are small and white, and tend to rub off easily making the skin look shiny. Sometimes it spreads up the body and down the legs, when small round or oval patches are seen, which later join together to form larger red areas.

On the scalp, the scales are larger, greasy and yellowish and they tend to stick to the head making it look crusted. This is commonly known as cradle cap. The forehead, temples, eyebrows, back of neck, behind the ears and the folds at the sides of the nose are often also affected.

Childhood seborrhoeic eczema is not usually itchy, sore or uncomfortable, so your baby should feed, play and sleep as usual, and hopefully be undisturbed by it

Products and Treatments for Seborrhoeic eczema

As with any form of dermatitis it's important to avoid shampoos, soaps, sprays and hair treatments that can irritate the scalp.