Balsam of Peru - where to find it, how to spot it 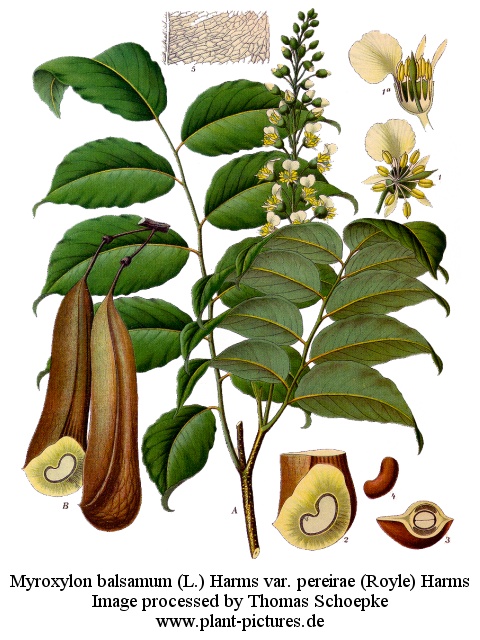 Balsam of Peru comes from the bark of the tree Myroxolon balsmum, common in El Salvador. It is an aromatic widely used in fragrances and flavourings.

Balsam of Peru smells of vanilla and cinnamon because it contains 60-70% cinamein – a combination of cinnamic acid, cinnamyl cinnamate, benzyl benzoate, benzoic acid and vanillin. The other 30-40% is made up of resins and essential oils similar to those in citrus fruit peel.

It has mild antibacterial, antifungal and antiparasitic properties so is also used in medicinal products. For many people it is a potent allergen.

Symptoms of Balsam of Peru Allergy

If they use products containing Balsam of Peru they may experience a flare-up of hand eczema. Other allergic reactions to Balsam of Peru are plantar dermatitis (shows as shiny fissures on the soles of the feet), rhinitis, and conjunctivitis. In a case study in Switzerland, a woman who was allergic to Balsam of Peru was allergic to her boyfriend's semen following intercourse, after he drank large amounts of Coca Cola. acid and vanillin. The other 30-40% is made up of resins and essential oils similar to those in citrus fruit peel.

Where Balsam of Peru is found:

Fragrances in perfumes and toiletries

Flavouring in food and drinks

Points to watch to avoid Balsam of Peru

If you’re avoiding Balsam of Peru use only labelled cosmetics, toiletries and medicines that do not list it among the ingredients.