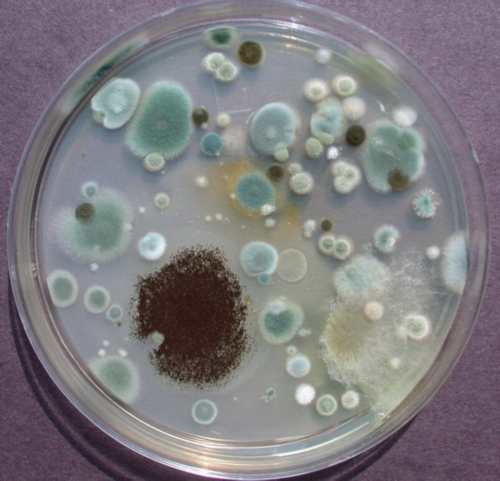 We’ve been trying out a new mould test today. I’ve set up the MouldCheck Test in my 96 year old Dad’s kitchen because there’s been a distinct smell of damp which I think is coming from under his sink but I haven’t been able to find the cause.

Every household has mould spores floating about in it, along with lots of other bits and pieces that are mostly too small to be seen with the naked eye – pollen grains, fragments from plants, fibres from clothing, specks of ash from smoke, skin flakes and diesel particles. But there are more mould spores than anything else. They come from houseplants, shower curtains and stored vegetables for instance and cause allergic reactions such as a runny nose, sore throat, itchy eyes, sneezing, coughing and breathing problems or skin irritation.

There are lots of different moulds but Stachybotrys, also known as “black mould” is more dangerous than other moulds. It’s the one that releases toxic chemicals called mycotoxins into the air. The important thing to remember is that if you can see mould growing indoors this confirms the presence of mycotoxins. If you can smell mould, there’s enough to make you ill.

So I’ve put the MouldCheck petri dish under the sink, left it for an hour as per instructions and then sealed it. In three days I have to count the colonies of mould spores that appear in the dish and that will tell whether the level of mould is Good, Acceptable, Poor or Very Poor and could affect Dad’s health.

So far so good, it was simplicity itself to set up the test, but now I’m a bit nervous about the results. I’ll report back in three days.

Meanwhile if you want to find out more about the MouldCheck Test it’s on our website.